Today we are going to introduce:Coriolis mass flowmeter

Coriolis mass flow meters utilize within themselves a physical phenomenon known as the Coriolis effect. As shown in the figure below, when fluid flows through a vibrating U-shaped tube, the Coriolis force effect works, reversing the flow between inflow end A and outflow end B and twisting the tube. According to the Coriolis effect, the weight of an object is proportional to its velocity, so by measuring the amount of twist, you can know the mass flow. 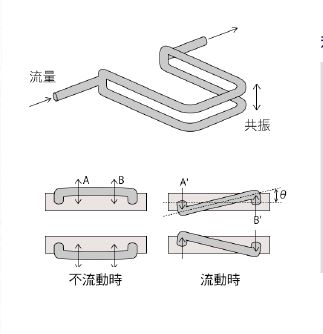 What is the Coriolis effect?
In the Northern Hemisphere, a bullet fired from the equator to the true north will be slightly east (to the right) off the target. This is because the earth rotates from west to east, and objects at rest at the equator move very fast, so inertial effects will hit the target. manifested in points.
Similarly, if the amplitude at the midpoint of the U-shaped tube is increased to produce huge vibrations, once the fluid flows through the inside of the tube, a Coriolis force effect will occur, where the mass of the fluid and the velocity (mass flow) are proportional to each other .

This effect acts in opposite directions at the inflow end and outflow end, thereby twisting the pipeline. By comparing the output voltage signals of the inflow and outflow ends of the pipeline, performing calculations, and then measuring the amount of distortion, the mass flow rate can be known.